Alerts You To Vehicles Approaching From Behind

Varia rearview radar from Garmin helps create a safer cycling environment by warning cyclists of vehicles approaching from behind up to 150 yards (140 meters). The radar rear light also warns approaching vehicles of a cyclist ahead. Works independently or integrates seamlessly with compatible Edge cycling computers. Edge computer or Varia head unit can show multiple approaching vehicles and indicates the relative speed of approach and threat level.

Getting Hit From Behind Is A Leading Cause Of Cycling Fatalities

The threat is real. That’s why getting some extra help knowing what’s sneaking up behind you is an important breakthrough. You already use caution and check over your shoulder, especially before making turns, but Varia radar gives you an important tool by watching behind you even when you aren’t.

Varia Bike Lights Are Smarter Than The Typical Bike Light

The Varia line of cycling awareness products also includes Varia smart headlights and rear lights. When paired with select Edge bike computers, these bike lights help to create safer riding conditions by adjusting the beam focus point according to a bike’s speed and matching brightness to changing light conditions. As speed increases, the headlight focuses further down the road to project light to where it’s needed most and brings it closer as you slow. As ambient light fades or gets brighter, both the headlight and rear light adjust automatically when paired with a light-sensing Edge 1000 bike computer. 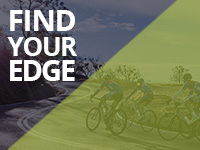