VIRB 360 is the first of its kind, capturing a complete sphere of high resolution video and audio – even photos. It eliminates the lengthy editing process with unrivaled 1-click video stabilisation up to 4K resolution at 30 fps and allows you to instantly livestream5 any adventure.

If it’s worth remembering, it’s worth a VIRB 360. This rugged, waterproof camera is true to its name, recording the full 360 degrees — horizontally and vertically. And you can forget about time-consuming post-production work, because VIRB 360 will auto-stitch1 your 4K footage in camera. If you’re looking for higher resolution, you can record video in unstitched 5.7K resolution at 30fps and stitch it together in VIRB Edit. Get even more control with different recording modes such as time lapse, manual, and the powerful new HyperFrame Director Mode, which gives you the editing power to easily reframe content after filming — using smooth camera pans, incredibly wide angles and even tiny planets.

Take a shaky, hard-to-follow video, and turn it into a smooth and stable masterpiece in 1 click. Regardless of camera movement, the 3 modes of 4K spherical stabilisation2 ensure a smooth video. Stabilise mode smooths quick movements and vibrations without overriding camera orientation. Use lock mode to secure the orientation of the camera in a specified direction. In follow mode, the orientation follows the GPS trajectory. There's even stabilisation for 5.7K, RAW video stitched in the VIRB Edit desktop app. Check out this video to see the difference our advanced stabilisation makes.

With the free, easy-to-use VIRB Mobile app and VIRB Edit desktop software, you can edit, stabilise, share and add data overlays to videos. Use the VIRB Mobile app to connect the camera to your compatible Apple® or Android™ device. Connect your NFC-enabled Android smartphone to the camera with just 1 tap of your phone on the camera. Then, use your smartphone as a remote control for the camera, see live 360-degree video of what you're recording, use a virtual reality (VR) device to instantly view your 360 videos in VR, or livestream to YouTube® and Facebook®7. 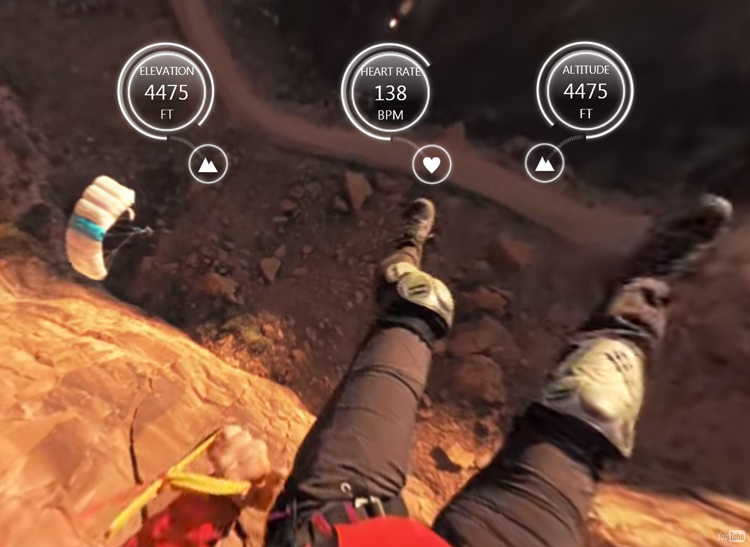 Retell your story in greater detail than ever before. Built-in sensors, such as GPS and GLONASS, barometer, accelerometer and more, provide countless customisable G-Metrix data overlay options in 360-degree augmented reality2. Just select premade templates of the data points you want, and see your custom data overlay displayed in your video.

“OK Garmin, start recording.” It’s that easy. When you are about to speed down a rugged hillside, chances are you don’t want to reach up and press start. Now you can just use a voice command8, and the camera will start and stop recording and take photos. Or ask VIRB 360 to “remember that” to tag specific moments in your adventure and quickly find them again later.

For the best viewing experience, we recommend you watch 360 videos in the YouTube app on a mobile device or tablet.

Apple® is a trademark of Apple Inc., registered in the U.S. and other countries.

iPad, iPhone and Apple are trademarks of Apple Inc., registered in the U.S. and other countries.
Android™ is a trademark of Google Inc.
The Bluetooth® word mark and logos are owned by the Bluetooth SIG, Inc. and any use of such marks by Garmin is under license.
Wi-Fi is a registered trademark of the Wi-Fi Alliance.

Recording 360-degree video gives you the opportunity to be fully immersed in every recorded memory. But before VIRB 360, it wasn't worth the hassle. With one-touch recording and one-click stabilisation1, Garmin makes shooting, sharing and watching 360 video easier and better than ever.

VIRB 360 captures fully spherical videos and photos. That means virtually everything above, below and around the camera so you'll never again have to worry about framing your shot.

Yes. Videos up to 4K are stitched in the camera and can be instantly shared to YouTube and Facebook through the VIRB App. Even view 360 videos in VR after uploading the files to the VIRB App or VIRB Edit desktop software.

Stitching is the process of combining video footage or photos captured by the camera’s 2 lenses. VIRB 360 will automatically stitch your footage in the camera in up to 4K/30fps resolution, saving you time and energy.

Out of the box, the camera will do the stitching for you. For a higher resolution and more control, you can record in 5K or 5.7K resolution and use the video stitching software of your choice to stitch the footage.

Download the lens profile for Autopano, software that can stitch your 5K and 5.7K footage.

Does this camera have image stabilisation?

Yes. VIRB 360 is the first 360 camera to feature 4K spherical stabilisation. With 1 click in the VIRB App or VIRB Edit desktop software, you can stabilise your video in up to 4K resolution using the following 3 modes of stabilisation: stabilise, follow and lock.

What does each stabilisation mode do?

How does stabilisation work?

VIRB 360 has many built-in sensors that record data about how your camera is moving. Using the VIRB App or desktop software, the videos can easily be stabilised.

How fast can I view stabilised footage?

Immediately, using the VIRB App or VIRB Edit desktop software. Just select a mode of stabilisation, and with 1 click your video is instantly stabilised. Your video will be permanently stabilised when it is shared or exported.

Your videos will have 360-degree audio when viewed on the VIRB App, in VIRB Edit desktop software or when shared on Facebook and YouTube.

Can I control VIRB 360 using the app?

How do I stabilise footage in the mobile app?

Tap the stabilisation icon during playback, and your videos will instantly stabilise.

Tap the VR goggles icon during playback, and your video will render in VR mode. The app is compatible with headsets such as Google Cardboard.

Pick a preset template of data fields, or customise and add data fields one at a time using the VIRB App or VIRB Edit desktop software. You’ll see your overlays when you share or export your video.